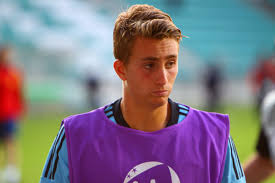 As per Sky Sports, Everton winger Gerard Deulofeu might be leaving the English Premier League to join Italian giant AC Milan on a loan deal. Deulofeu’s first team chances have diminished further with Enner Valencia’s rise to prominence.  After Yannick Bolasie’s injury, Deulofeu was the first choice but after a couple of impressive displays by Valencia, which started with Manchester United, Deulofeu is again down in the pecking order.

Ronald Koeman will really be short of options on the right flank if Deulofeu leaves this winter. The Spaniard has four starts in the 11 appearances in the league this season so far. And he might be going out for first team chances.

The Spanish press has also linked the 22-year-old with possible moves to Marseille and Deportivo La Coruna. With numerous European clubs approaching, holding on to him will be difficult.

His first team chances have hugely dried up at Manchester United and with Henrikh Mkhitaryan in the form of his life, chances are highly unlikely to come anytime soon. With Mourinho preferring Anthony Martial and Marcus Rashford time and again, Depay’s departure is almost a given.

There’s no doubt about Depay’s ability on the flanks. He is perhaps way better than both Valencia and Deulofeu when on song but he is yet to hit the same strides that he achieved at PSV. Everton have been suffering hugely in the attack and he will bring in a different dimension.

The 25-year-old Italian has risen to prominence with Napoli and is a very tricky attacker. Although he is more of a central attacking midfielder, he can play on flanks and could be a huge plus for Koeman.

His technique on the ball and close control is superb and could increase the ball supply that Lukaku is seeking. He’s been touted to play abroad for some time now and perhaps Everton’s ambitious project could attract him.

Swansea City are languishing in the relegation zone and going through many changes. Montero, who is a very agile player, could be on the move as the Swans are likely to lose their better players with the situation they are in.

He is way better than most of the Swansea attackers and Koeman could have a golden chance to pick him up now. A fantastic dribbler and impeccable with his crosses into the box, he is too good a target to be missed. The Ecuadorian international could be the perfect replacement and boost the Toffees’ top half ambitions.