Brazil will aim to book a place in the 2022 World Cup semi-finals when they take on Croatia at the Education City Stadium on Friday.

Selecao thrashed South Korea 4-1 in the last 16 earlier this week, producing an exhilarating first-half display to show why they are the tournament favourites. Goals from Vinicius Jr. Neymar, Richarlison and Lucas Paqueta helped Tite’s side outclass South Korea and book a place in the World Cup quarter-finals.

However, it doesn’t get easy from here on as the South Americans take on the 2018 World Cup finalists Croatia, who beat Japan in the last 16 on penalties following a 1-1 draw after extra time.

Alex Telles and Gabriel Jesus have already been ruled out for the rest of the tournament, while Alex Sandro remains doubtful for the clash with Croatia.

Sandro missed the big win over South Korea and the group-stage defeat to Cameroon with a hip injury, and Tite claimed ahead of the last 16 match that the left-back hasn’t fully recovered yet.

Alisson Becker conceded his first goal of the tournament earlier this week when the South Koreans scored from a long range. He is a certainty to start in goal for Selecao.

Thiago Silva and Marquinhos are pillars at the back for Brazil, and their experience and winning mentality would come in handy in such a big game. The duo will pick themselves in central defence, with Eder Militao getting the nod at right-back ahead of veteran Dani Alves. 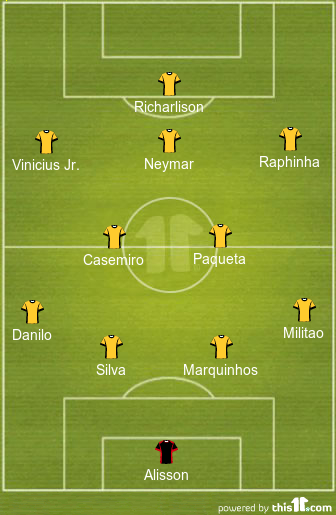 There is a chance of Alex Sandro recovering in time from a hip problem to face Croatia, and if he does it will likely be Danilo dropping out of the side. However, for now, Danilo looks likely to start at left-back.

Up ahead in midfield, Casemiro and Lucas Paqueta have worked well and deserve to retain their places in the starting XI. With Casemiro acting as a shield for the back four, Paqueta gets the license to roam and make things happen in the final third. Brazil’s midfield duo will aim to dominate possession and keep things simple against a solid Croatian side.

Neymar returned back from an ankle problem against South Korea and scored a penalty. He is Brazil’s star man and will have the onus of unlocking the well-drilled Croatian defence.

Raphinha and Vinicius Jr. have been Tite’s preferred wide attackers at the World Cup, and their creativity, pace and flair could prove vital in breaching the Croatian backline. Both Raphinha and Vinicius Jr. are more than capable of exploiting the gaps between the opposition defence, so Zlatko Dalic’s side will need to be on their toes for the entire game.

With three goals in three games, Richarlison is a man in form for the South American side. He will be raring to get himself on the score sheet again. The likes of Fred, Rodrygo Goes, Gabriel Martinelli and Antony could come on in the second half of the game if required.