Arsenal will welcome Villarreal to Emirates Stadium tonight as the two sides clash in the second leg of the Europa League semi-final.

The Gunners were poor last week when they travelled to El Madrigal, and were deservedly beaten. Villarreal will head into the second leg with a 2-1 lead.

However, the Spanish team will be upset that they were not able to score a few more goals after thoroughly dominating the game. A late spot-kick from Pepe helped Arsenal stay in the tie.

Mikel Arteta remained tight-lipped when asked about his players’ injuries. David Luiz made a return last weekend for the Gunners against Newcastle. However, he was forced to leave the pitch with a hamstring injury after just 53 minutes.

It was initially established that Kieran Tierney would miss the remainder of the season, but his dramatic return to fitness might have come at the right time.

Alexandre Lacazette missed the previous two games due to a thigh injury. But he was spotted in Arsenal’s last training session which tells that there is a possibility that he might feature in this game.

Bernd Leno is set to replace Mat Ryan, who earned his second start for the Gunners at the weekend. Mikel Arteta will be hoping that Leno puts in a brave performance, just like he did last week.

Starting David Luiz can be a big risk after his hamstring injury on Sunday. Arteta might go back to his preferred pair of Rob Holding and Pablo Mari. Hector Bellerin and Kieran Tierney should operate start as the full-backs in the Arsenal lineup.

If Tierney is fully fit, Granit Xhaka will be shifted back to his favoured midfield spot. Thomas Partey has not been at his best this season. However, he has been a part of some big European nights. Having him at the centre of the park will give more stability to the side.

For the number 10 spot, it has to be a toss-up between Emile Smith Rowe and Martin Odegaard. The former has been consistent throughout the season. Thus, Arteta should stick with Smith Rowe. If Arsenal are in need of goals in the second half, we might see Martin Odegaard get some action. 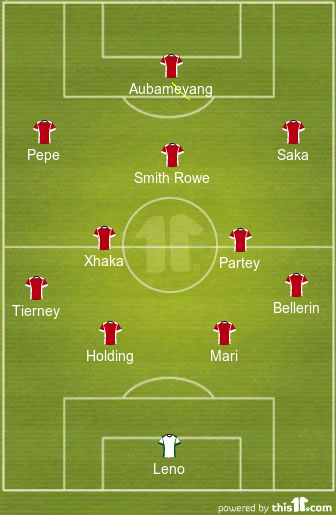 After a goal and an assist over the weekend, Aubameyang is riding high in confidence. He should be starting at the number nine spot. Pepe and Bukayo Saka will have the responsibility to create goal-scoring chances. Saka has been in fantastic form this season, and fans will once again look at him for some inspiration.