Tottenham Hotspur will face Newcastle United at St. James’ Park on Sunday. Spurs have won four of their last five games, and a win this weekend could keep them within touching distance of West Ham United and Chelsea in the chase for a top-four spot.

Spurs cannot afford to drop too many points in their 9 remaining fixtures. They are now three points and two positions away from a spot in the Champions League and need a strong end to the season and hope Chelsea start conceding goals(!)

The situation is almost similar for their opponents but the fight is at the bottom for Newcastle. Steve Bruce’s side are two points above the relegation zone and have a game in hand. Even a point against a strong Spurs side will be a positive for the Magpies.

Spurs are still missing Ben Davies, who was forced to withdraw from the Wales squad due to a calf injury at the start of the international break while Matt Doherty is also unavailable.

Sergio Reguilon and Son Heung-Min have been passed fit however and are in line to start in the Tottenham lineup.

Erik Lamela is back in the squad after serving a one-match ban against Villa.

Hugo Lloris will keep his starting spot in the Tottenham lineup after leading France in the international break.

Jose Mourinho has a lot of defensive options, but only a few of them have managed to gain his trust.

Also, with Toby Alderweireld returning from international duty after having played all three matches for Belgium, the Portuguese tactician could rest him for this encounter.

This will enable Eric Dier and Davinson Sanchez to play at centre-back.

Mourinho might prefer Japhet Tanganga in the right-back position over Serge Aurier. We expect Sergio Reguilon to be fit and start as the left-back in the Tottenham lineup.

Tanguy Ndombele is set to start after missing France’s last match. He is likely to be partnered by the ever-present Pierre-Emile Hojbjerg in central midfield.

Jose has a lot of options in the attacking third but we are backing Lo Celso to get a start in the hole behind the striker in the Tottenham lineup.

Son Heung-Min is in line for a start after Jose said he would be ”selected”. He will feature on the left in the Tottenham lineup while Lucas Moura could take up the opposite flank.

Harry Kane will lead the line and will relish the chance of facing a poor Newcastle backline. 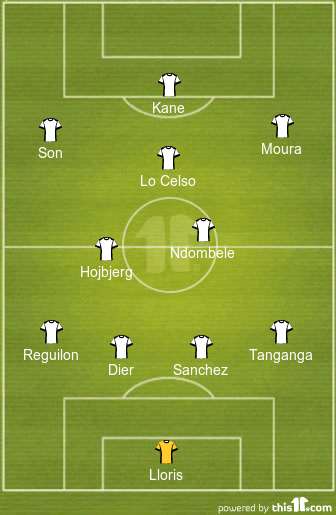