Manchester United will look to turn their season around on Saturday when they face Newcastle United at St James’ Park. The Red Devils will need a win to build some momentum ahead of a string of tough games.

Ole Gunnar Solskjaer’s side lost 6-1 to Tottenham right before the international break, and it was a game where nothing went right for the side. The performance will have to be a lot better than what they mustered up against Spurs earlier this month.

Solskjaer will be wary of the Newcastle United team, who beat them last season at St. James’ Park. The Magpies have some quality players in their attack and can test even the best of defences on their day.

Manchester United have several players unavailable for Saturday’s clash. New signings Alex Telles and Facundo Pellistri have only recently arrived at the club, with Telles returning from South America on Thursday.

Pellistri will not play but Telles has a chance of playing, while another new signing, Edinson Cavani will be unavailable as he is quarantining. Phil Jones and Axel Tuanzebe are still unavailable due to injury, while Anthony Martial will miss the game through the suspension.

The latest injury worry is captain Harry Maguire as Solskjaer revealed in his press conference that the Englishman sustained a knock on international duty.

Let’s take a look at the possible Manchester United lineup for the game against Newcastle United:

David de Gea should start in goal for Manchester United. The Spaniard will hope for a clean-sheet, something he is yet to achieve this season.

Harry Maguire is a doubt for this game, and if he is not available, Solskjaer will have to play the centre-back pairing of Victor Lindelof and Eric Bailly. Aaron Wan-Bissaka and Luke Shaw should play at right-back and left-back respectively in the Manchester United lineup. Telles could be on the bench as he hasn’t trained much with his new teammates.

Solskjaer could make a few changes to United’s midfield from the one that lost against Tottenham. Paul Pogba could be dropped with new signing Donny van de Beek potentially starting for the first time for Manchester United. 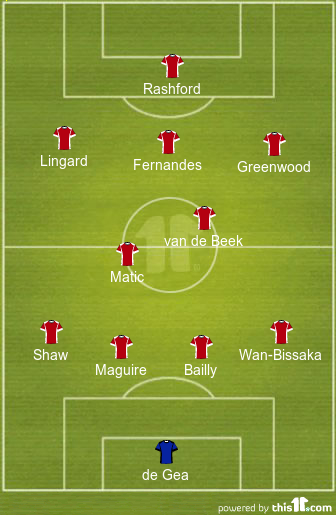 Nemanja Matic may retain his place, despite his poor game against Spurs. Bruno Fernandes should continue in the No. 10 role in the Manchester United lineup.

Anthony Martial’s suspension means that Marcus Rashford could play up front for the Red Devils. Mason Greenwood should start on the right, while Jesse Lingard or Daniel James could play on the left. Lingard could get the nod as James put in a below-par performance against Crystal Palace in United’s opening game of the Premier League season. 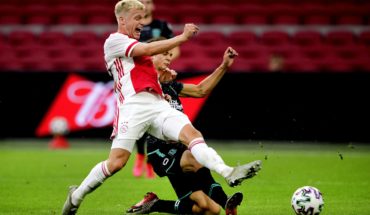