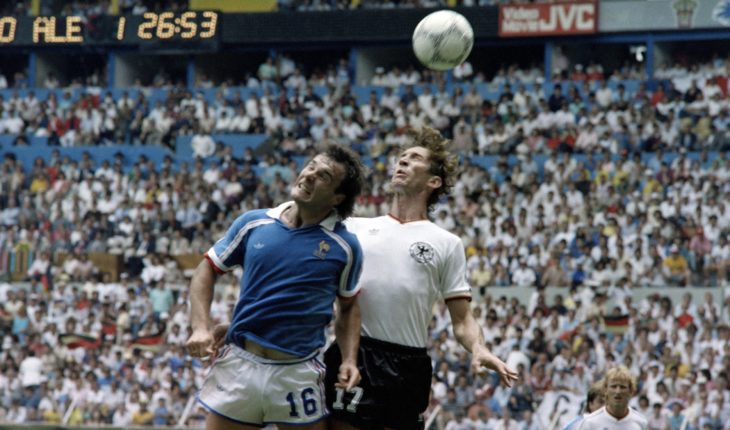 Football has its way of leaving you gobsmacked. A thunderous volley, an unstoppable run, or a crunching tackle often gets the fans out of their seats. The effort put behind every action there is in the game is colossal.

Regardless of the astronomical wages the players make, every stretch, every sprint and every clearance has its risks. The grimace on a footballer’s face while on the deck speaks a thousand words.

Injuries are part of the game. But what happened in September 1989 in the Bundesliga will make the fans shrivel in their seats.

It was another hotly contested Nordderby in Germany. For the uninitiated, the Nordderby is a clash between Werder Bremen and Hamburg, two Bundesliga giants from the North of Germany. There are no soft derby games, are there?

Compare derby clashes with the normal games and you can spot the obvious differences. The tackles tend to be more ferocious, the sprints seem to have more exertion, and overall effort put in while chasing lost causes increases manifold.

Hamburg and Werder Bremen squared off in the derby on September 20th in the year 1989, and there was quite a lot riding on the game. Both the teams were heavyweights back then but had poor starts to the season. While Hamburg were 16th in the league table heading into the game, Bremen were eighth and were hurting after they had relinquished the Bundesliga title to Bayern Munich the season before.

Playing at home, Hamburg romped to a 4-0 win but a nasty incident in the first half involving defender Ditmar Jakobs overshadowed the game.

Jakobs’ brave goal-line clearance to deny Werder Bremen forward Wynton Rufer the opener in the 20th minute of the game turned out to be the game-changer for the hosts, but sadly, it was the end of Jakobs’ career.

To the naked eye, Jakobs’ clearance seemed innocuous as he raced towards his own goal and cleared the lobbed attempt by Rufer. After he made the clearance, Jakobs’ momentum took him inside the goal as he slid into the net.

“I was stuck somewhere, groping my back and felt the goal net, but also cold metal,” said Ditmar Jakobs.

Only after his failed attempts to free himself did Jakobs get a hint that the hook that was used to attach the goal net to the ground somehow made its way inside the defender’s back because of the momentum with which he slid into the net. 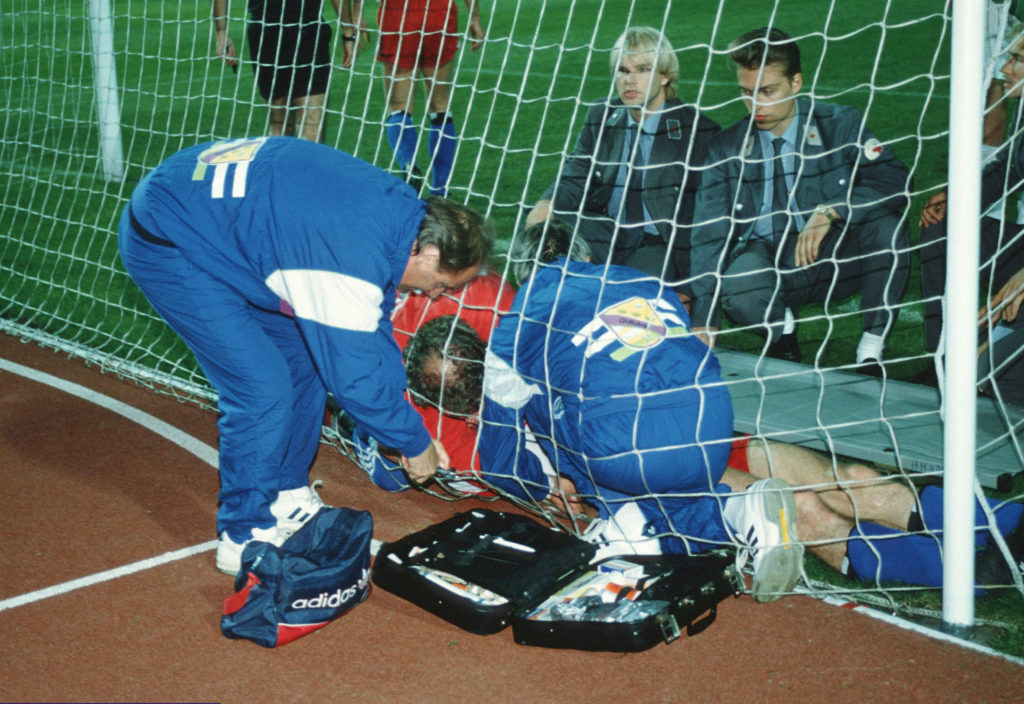 The team’s Physiotherapist Hermann Rieger and Doctor Gerold Schwarz’s intervention was quick, but it took 21 agonising minutes for them to free Jakobs.

The harrowing experience ended when the duo used a scalpel to cut out a large portion of flesh from Jakobs’ back because they simply couldn’t turn the player the other way to surgically remove the hook or even cut the hook which was made out of steel.

Jakobs later revealed that while under shock, he didn’t feel any pain but the incident put an end to his career. He returned to training of course, but the result of the process on the pitch left him with motor disorders and a bout of permanent pain.

The former Germany international later wrote in a column on Der Spiegel: “Further investigation revealed that during the rescue operation several spinal processes of the vertebrae had been cut off and important nerves had been severed, three centimetres from the spine.

“A complete regeneration of the nerves did not occur, pain and the disturbed motor function remained. My career had been terminated by the snap hook suddenly.”

At the time, Jakobs was 36 and in the twilight of his career. He may not have played for too long even if he hadn’t picked up the injury, but it was a heartbreaking end to his career. 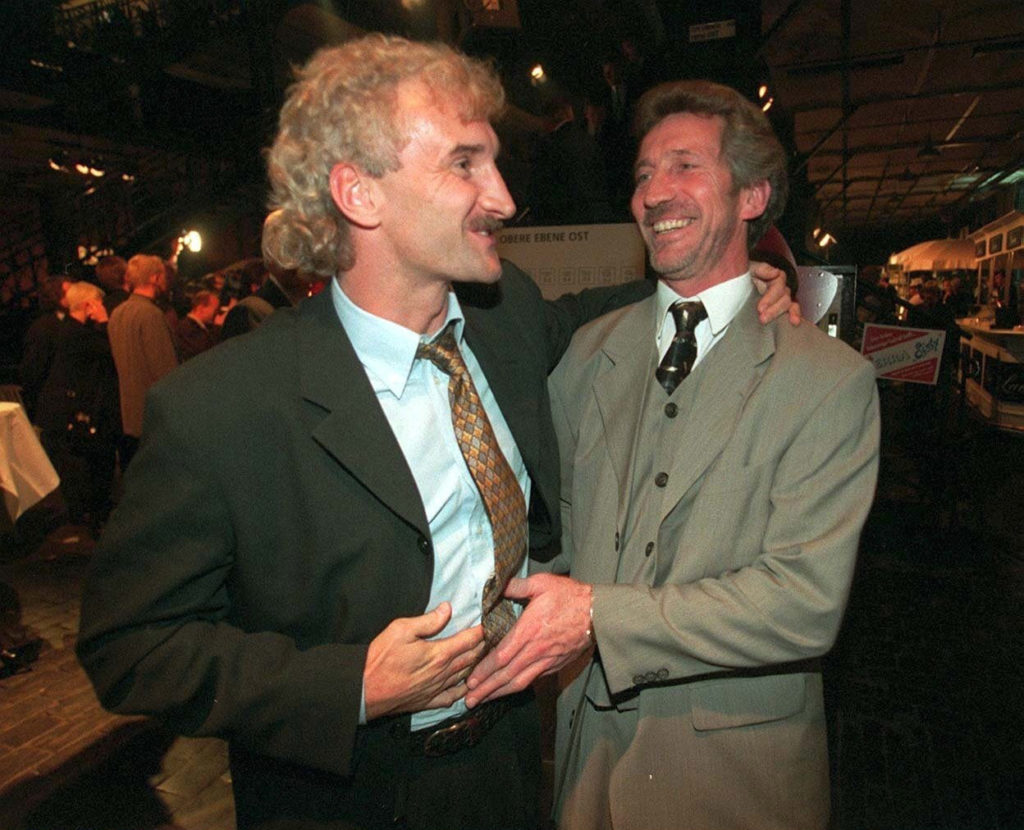 Jakobs lifted back to back Bundesliga titles with Hamburg in 1982 and 1983, and the latter was all the more sweet as they beat Werder Bremen to lift the Meisterschale (Champions Shield). He was a prominent player on the international stage as well and helped the West German side reach the 1986 World Cup final before his side came up against Diego Armando Maradona’s Argentina.

Outside Germany, Franz Beckenbauer is often the player that comes to one’s mind when you speak about sweepers. Jakobs was the heir to Der Kaiser. Who knows? Had West Germany won the World Cup in 1986 with Jakobs playing the Libero role, his injury in 1989 might have made headlines everywhere.

Jakobs now runs an agency and is an insurance broker. The former German international celebrated his 66th Birthday in August 2019 and said he does not want to be remembered for what happened in 1989.

Considering everything Ditmar Jakobs achieved before that unforgettable night in Hamburg and after his injury, it is unlikely that the fans will remember him for only the little piece of carabiner hook that ended his career.

More than 20 years after the incident, former Werder Bremen forward Uli Borowka, who played in the game, could not have put it more articulately.

“That was a bad story, we were even more shocked and lost the game. The fact is that the Nordderby was always about everything, it was an extraordinary game.”