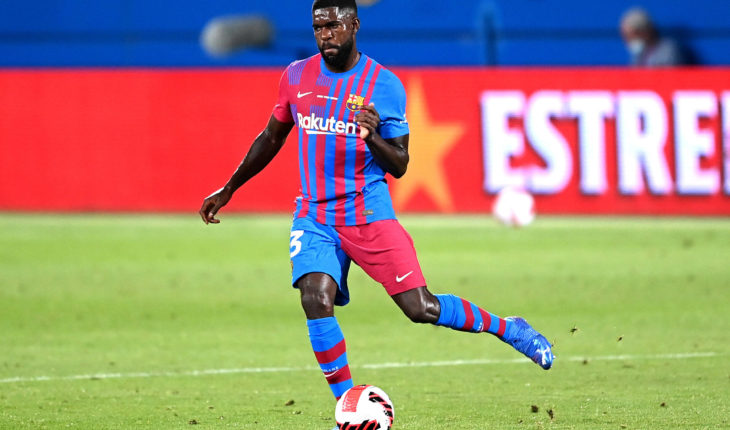 Everton are keen on strengthening their defence by signing Barcelona centre-back Samuel Umtiti. The French defender has been with the La Liga side since 2016, but his Barca career has been seriously affected by a number of injuries ever since the defender won the World Cup in 2018.

As per Daily Express, Everton have enquired about the availability of Umtiti, who is reportedly up for sale. A recent report had indicated that Barca could cancel the Frenchman’s contract due to their financial crisis. The Catalan side have reportedly given the 27-year-old a week’s time to find himself a new club or he could face contract termination.

He still has two years remaining on his current deal at the club. Samuel Umtiti has made 132 appearances for the club since moving in 2016 but hasn’t played more than 20 times a season in the last three campaigns. The Frenchman has lifted two league titles in his spell with the Catalans.

Samuel Umtiti: Can he spark their European football hopes?

Everton manager Rafa Benitez currently has four centre-back options at the club – Michael Keane, Yerry Mina, Mason Holgate, and Ben Godfrey. Keane seems to be the first-choice option at the back, and he will likely be paired with one of the other three centre-backs this season. Mina, who is another former Barca player, hasn’t really lived up to expectations at the club and has also been inconsistent.

Holgate and Godfrey are decent young defenders who can be used in rotation, but aren’t good enough to help Everton into European football spots. The two youngsters are versatile players, capable of playing at centre-back and right-back.

Everton, though, need a strong, quick, and experienced defender who can take the club to the next level. Benitez’s style of play depends on a strong and assertive defence which the Toffees currently don’t have. Samuel Umtiti could be a tremendous signing for Everton, but he also comes with a huge risk attached to him as he has suffered numerous injuries in recent years. The Barca defender is on huge wages which Everton will not want to spend if he’s on the treatment table for most of the time at Goodison.

The Frenchman is a strong, powerful and quick defender who can brush off attackers with his strength, and also carry it forward to initiate attacks. He has the knack of nullifying attacks with his strength, speed and awareness. Umtiti has vast experience, having played in the French and Spanish leagues, as well as for his national side.

Everton could improve their defence significantly with his addition to the starting XI, while his ball-playing ability will also be a huge boon to the Toffees’ attack.