Real Madrid have signed quite a few players ahead of the 2019-20 season as manager Zinedine Zidane rebuilds his side to turn around their fortunes. The Spanish giants have spent around €300 million, with their most expensive signing being Eden Hazard from Chelsea, for a fee of around €100 million. But the huge transfer outlay for these new players means that Zidane must let go of several players to balance the books.

One player that Los Blancos are willing to let go is Dani Ceballos, with the 22-year-old being deemed surplus to requirement at the Spanish club for the foreseeable future. Two Premier League sides, Arsenal and Tottenham Hotspur, are reportedly interested in signing the Spanish midfielder, with the former now the frontrunners in signing him. Marca have reported that Gunners are now the favourites to sign him despite interest from north London rivals Spurs, with reports suggesting that manager Unai Emery wants to bring the Spanish midfielder on loan.

Ceballos joined Madrid from Real Betis in 2017 for €18 million but has not become a first-choice pick at Madrid. He made 34 appearances in the 2018-19 season, scoring thrice and providing two assists. He was a part of the squad that played in the UEFA European Under-21 Championship that took place recently where he scored twice and made two assists.

A wise choice by Emery?

The 22-year-old is a player who can play as a midfielder or further forward on the pitch as an attacking midfielder, while he is also capable of playing on the left. Ceballos is a good passer of the ball and links up play very well between attack and midfield, while he is a strong dribbler too. An all-action midfielder, the youngster has good work-rate and provides cover to the defence while also pushing forward.

He averaged 44.1 passes in La Liga last year with a high pass percentage of 92.6% which shows that he can retain and rotate the ball well. The player is also a useful tackler too, averaging 2.3 tackles a game.

A promising operator, he would be a better fit at Arsenal than Spurs and will get more opportunities at the Emirates as well. Arsenal need a player to replace Aaron Ramsey, who joined Juventus in the summer. A good passer of the ball, Ceballos looks like a player that manager Unai Emery would love in his system. With Europa League to navigate and possibly target as the route into the Champions League, Emery will need quality depth and more options to avail and Ceballos is someone who fits the bill perfectly well. 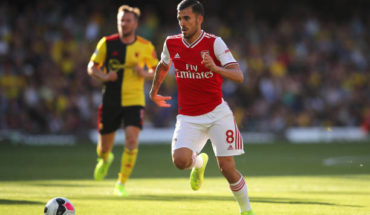