The Lilywhites are currently fourth in the table, but will have an opportunity to go above third-placed Chelsea, should the Blues fail to collect all three points this weekend.

Harry Kane, Davinson Sanchez, Jan Vertonghen and Harry Winks have all been ruled out with their respective injuries. Heung Min-Son and Juan Foyth, are both serving three-game suspensions while Danny Rose and Victor Wanyama are doubts heading into this clash and will be assessed before the game.

With Vertonghen and Sanchez out and Foyth suspended, Mauricio Pochettino is devoid of options in the defensive department. And this could force the Argentine to revert to a four-man backline. It could also force him to deploy Ben Davies in central defence, where he will be partnered by Toby Alderweireld.

Kieran Trippier could be rested, with Serge Aurier likely to make his return to the starting lineup this weekend. The Ivorian returned to training this week and will replace Trippier in the right-back position.

Rose’s likely absence, meanwhile, will pave the way for Kyle Walker-Peters to deputise for the English international in the left-back role. It will be interesting to see how the youngster fares against a sharp Everton attack on Sunday.

Hugo Lloris will retain his place in goal and will be aiming to preserve his first clean sheet in five matches.

Eric Dier is a guaranteed starter this weekend, especially with Wanyama and Winks suffering from injuries. Moussa Sissoko will partner the English international in central midfield.

Dier’s robust style of play in midfield will be vital in dealing with the likes of Gylfi Sigurdsson and Bernard while Sissoko will look to apply pressure on the Everton ball-carrier in half-spaces.

The duo will be supported by Christian Eriksen, who will operate in a slightly advanced midfield role. Eriksen will be influential in easing Tottenham’s transition as well as bringing others into the game with his sublime passing range.

Son’s absence means Fernando Llorente is almost guaranteed to spearhead the Tottenham attack this weekend. The Spaniard will be supported by Lucas Moura, whose incredible hat-trick earned his side a place in the Champions League final this season.

Dele Alli, meanwhile, will operate in the lone attacking midfield role although he’s likely to drop deeper and support the midfielders. 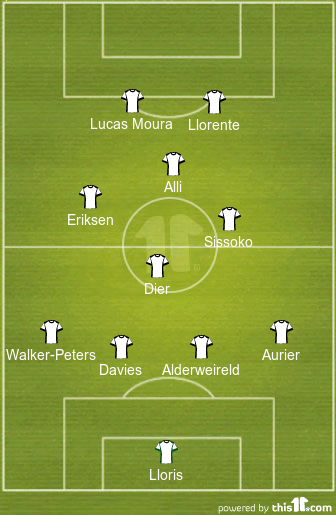