Arsenal will look to return to winning ways when they travel to King Power Stadium to face a tricky test against Leicester City today.

The Gunners are currently on a slump at the moment, having lost their previous two league matches and their hopes of finishing in top four could be shattered, should they fail to secure all three points against the Foxes.

Hector Bellerin(knee) and Rob Holding(ACL) will miss out due to long-term injuries while key midfielders in Aaron Ramsey(hamstring) and Denis Suarez(groin) along with forward Danny Welbeck(ankle) have also been ruled out for the trip to Leicester City.

Pierre-Emerick Aubameyang, however, is likely to return after missing the last game due to a facial injury.

Implementing the four at the back formation against Wolves turned out to be an absolute disaster for Unai Emery and the Spaniard is likely to revert to his preferred 3-4-2-1 shape this weekend.

That means Shkodran Mustafi could return to central defence, where he will be partnered by Sokratis and Laurent Koscielny at the heart of Arsenal’s three-man backline.

Mustafi’s return will force Nacho Monreal to shift into the left wing-back role. The Spaniard will likely start ahead of Sead Kolasinac, who is also an option on the left while Ainsley Maitland-Niles is a guaranteed starter on the right flank.

Bernd Leno will retain his place in between the sticks for Arsenal. The German international will keen to improve after conceding six goals in his last two matches.

Granit Xhaka returned from injury to start against Wolves in midweek and the Swiss international is likely to retain his place in central midfield on Saturday.

Xhaka will be partnered by Lucas Torreira in Arsenal’s double-pivot, where the former Gladbach midfielder will be tasked with the responsibility of bringing the attackers into the game with his ball distribution.

As for Torreira, he will look to disrupt Leicester City’s flow in midfield and it will be interesting to see how he fares against Belgian international Youri Tielemans this weekend.

Mustafi’s inclusion into the back three could come at the expense of Mesut Ozil while Aubameyang is also unlikely to start.

That means Alexandre Lacazette could once again spearhead the Gunners attack this weekend. And the Frenchman will be supported by the offensive duo of Henrikh Mkhitaryan and Alex Iwobi, who will continue to deputize for the injured Ramsey. 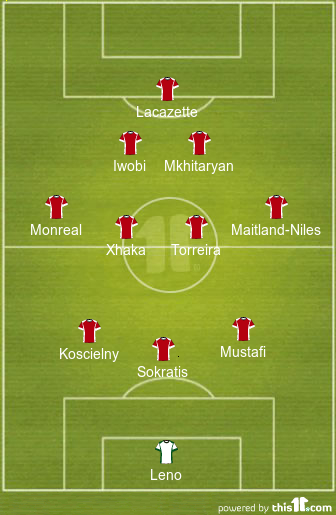