Following an impressive start to the season with four wins in four matches, Watford have stuttered since, remaining winless in their next four fixtures. As a result, the Hornets have slipped to ninth in the league table, level on points with eighth-placed Manchester United as they look to spark a comeback after the end of the ongoing international break.

In the meantime, here is Watford’s strongest lineup based on the displays this season.

Ben Foster has been the predominant number one keeper for Watford this season, leaving us with little choice but to start him in between the sticks.

In the right-back position, Daryl Janmaat trumps Kiko Femenia, thanks to his excellent numbers. The Dutchman averages 2.5 tackles and 2.7 interceptions per game while Jose Holebas, having made 25 clearances as well as securing four assists in eight matches, will be deployed on the opposite flank. He gets the nod ahead of new signing Adam Masina(six minutes of league action) and Marvin Zeegelaar, who is yet to feature this season.

Craig Cathcart will start in central defence alongside Christian Kabasele. The defensive duo has been a regular this season with the likes of Miguel Britos and Younes Kaboul not featuring thus far while Sebastian Prodl has participated in only one match in all competitions.

Watford have strictly followed Javi Gracia’s preferred 4-2-2-2 formation this season, which will see Abdoulaye Doucoure start at the base of the setup, alongside Etienne Capoue.

Although Doucoure has failed to replicate his last season form, the Frenchman remains a key part of Watford’s midfield setup, especially in the creative department, having averaged over 1 key pass per game.

Capoue, on the other hand, has averaged the most number of interceptions and tackles amongst his teammates who have played at least three league matches this term. He also averages 2.3 clearances per game whilst winning almost 2 aerial duels, making him the complete package in midfield and indeed, a useful partner to the more dynamic Doucoure.

Tom Cleverly has struggled with injuries this season, making it easier for us to pick the duo of Roberto Pereyra and Will Hughes in attacking midfield. Although none of them has quite managed to replicate the dynamics of the departed Richarlison, their intelligence in the final third has certainly proved useful to the Hornets, at times.

And finally, the Watford attack will be led by the duo of Andre Gray and Troy Deeney. They have scored a combined total of five goals this season and though Gray lacks the technical qualities to form quick interplays with the likes of Deeney and Pereyra in the final third, his superior aerial prowess makes him the target man.

Having said that, it’s Deeney who has won a whopping total of 49 aerial duels this campaign. 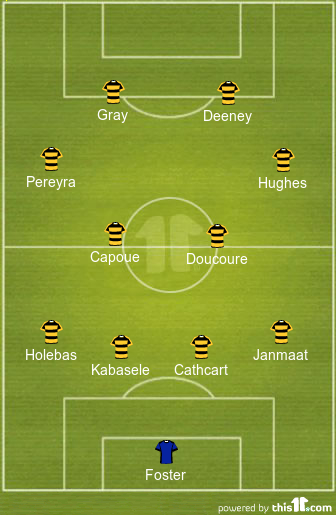